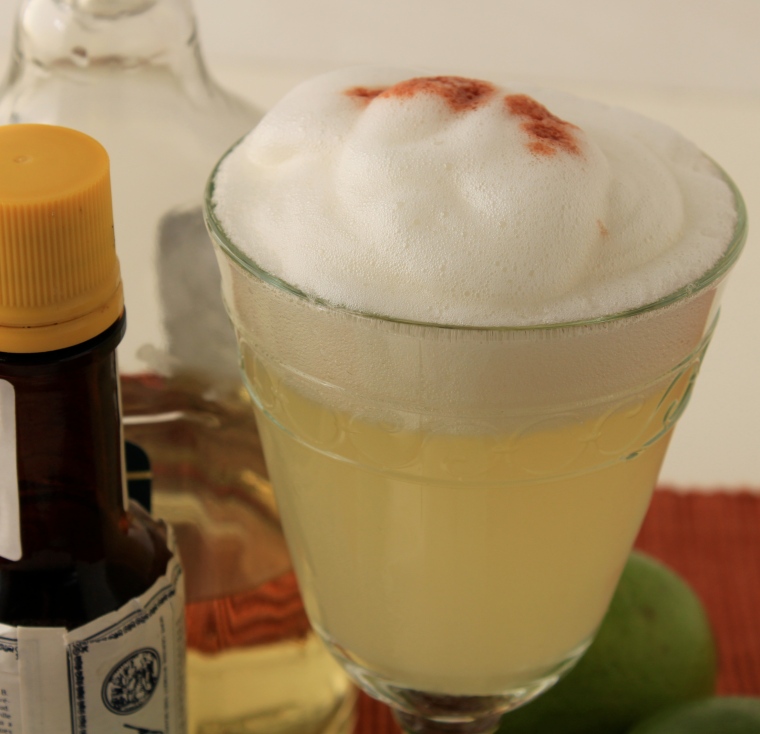 This is Part Six of my week-long celebration of eggs. Today, finally, I mix eggs and alcohol.

My personal foreign policy requires me to stay out of other nations’ conflicts, particularly Latin American disputes. So, with that in mind, it is with some nervousness that I write this entry.

To make matters worse, I risk wading into one of the most contentious conflicts in South America: who makes the better pisco sour, Peruvians or Chileans?

It seems a little silly, but the enmity over this cocktail is so bitter that it has hampered peaceful relations between the two nations, which still haven’t got over the 19th Century War of the Pacific. In case you think I am making this up; here’s a direct quote from Wikipedia:

“Even to this day the efforts of finding a point of peaceful relations have been constantly thwarted by conflicts involving maritime disputes and the location of origin of foods such as the potato, pisco, and the chirimoya.”

Pisco is a liquor distilled from wine.  It was first made in….let’s just say, somewhere down there, and is the signature ingredient in pisco sours, a cocktail widely consumed in (alphabetically) Bolivia, Chile and Peru. The sourness comes from limes or lemons, and is countered with sugar.

If the Chileans and Peruvians ever really did go to war over pisco sours, they could fight shouting “Don’t shoot until you see the whites of their eggs,” because it is the foamy egg white on top that really makes this drink distinctive.

So, here’s where it gets delicate: my experience with pisco is strictly Chilean. Our genuine Chilean friend, Daniel, first made us a genuine Chilean pisco sour (OK, seven) and I’ll never forget the first sip of what I can only describe as key lime pie in a glass. That’s not true; I don’t remember a thing about the first sip or that entire evening. But I vehemently deny L’s assertion that I swayed around the room singing “pisco, pisco duck, everybody’s doin’ the pisco duck.”

Shake ingredients very well and strain into 4 glasses. Top with a splash of bitters.

(By the way, if you’ve never heard Disco Duck, click here, but I’m not sure why you’d want to do that.)