Even the most cynical teenager has a weakness. Finding that soft spot can be difficult, especially when they are at their worst – standing there with their arms crossed, refusing to make eye contact with what has to be the worst half of the worst set of parents on the entire planet, mumbling angry, monosyllabic answers to the most innocent questions. But, even then there is always something you can say that will make them smile despite themselves. That, of course, just makes them madder. But it’s fun. I’m told this anger is just teenage angst – an inevitable  biologically driven quest for independence; it’s evolutionary, out of their control because of the hormones coursing through their veins. It’s all perfectly normal.

Nonsense. I say it’s just a good old-fashioned lack of respect and they should all immediately be sent to military boarding schools where cold showers and tepid gruel will teach them a thing or two about just how lucky they were back at home even with the stupidest, most embarrassing parents in the world. We didn’t act like that when I was a teenager. Nosiree.

But L won’t let me send them to boarding school and, since I am determined to get to the lake and pick the wild blueberries from my very own wild blueberry bushes before the birds do, I am forced to resort to the only other tried-and-true parenting technique I know: Bribery.

Teenagers aren’t as dumb as they act and they know the best bribe is cash. They will hold out as long as possible for as much as possible because parents

can be counted on to give in. But even large amounts of money won’t get them into a car headed for a weekend at the lake; there is, you see, no place to spend money at the cottage (the teenage brain can’t grasp the idea of saving the money till they get back to town. It must be spent right away). So, we look to other things.

This year’s summer bribes included a swim raft, permission to bring the Xbox to the lake (something that was supposed to happen “over my dead body”) and multiple boxed sets of DVDs of all the TV shows they are missing.

And blueberries and ice cream for breakfast. 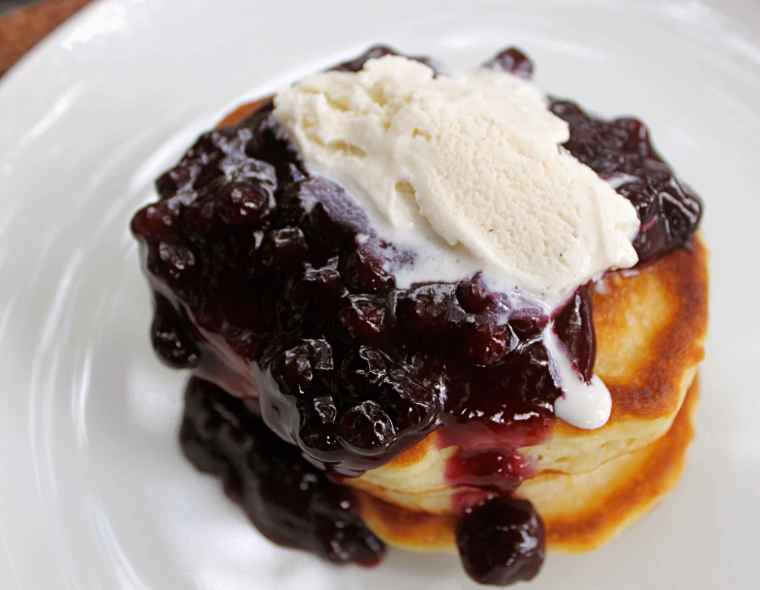 Serve over crepes, pancakes or waffles. Add a bit of ice cream to keep the kids happy. Who knows, they might even smile.

Whisk cornstarch into half the water until dissolved. In a small pot over medium heat, bring 1-1/2 cups blueberries, orange juice,  sugar and the rest of the water to a boil. Stir in dissolved cornstarch and stir until sauce is thickened.  Reduce heat and simmer for two or three minutes. Stir in remaining blueberries and serve immediately.